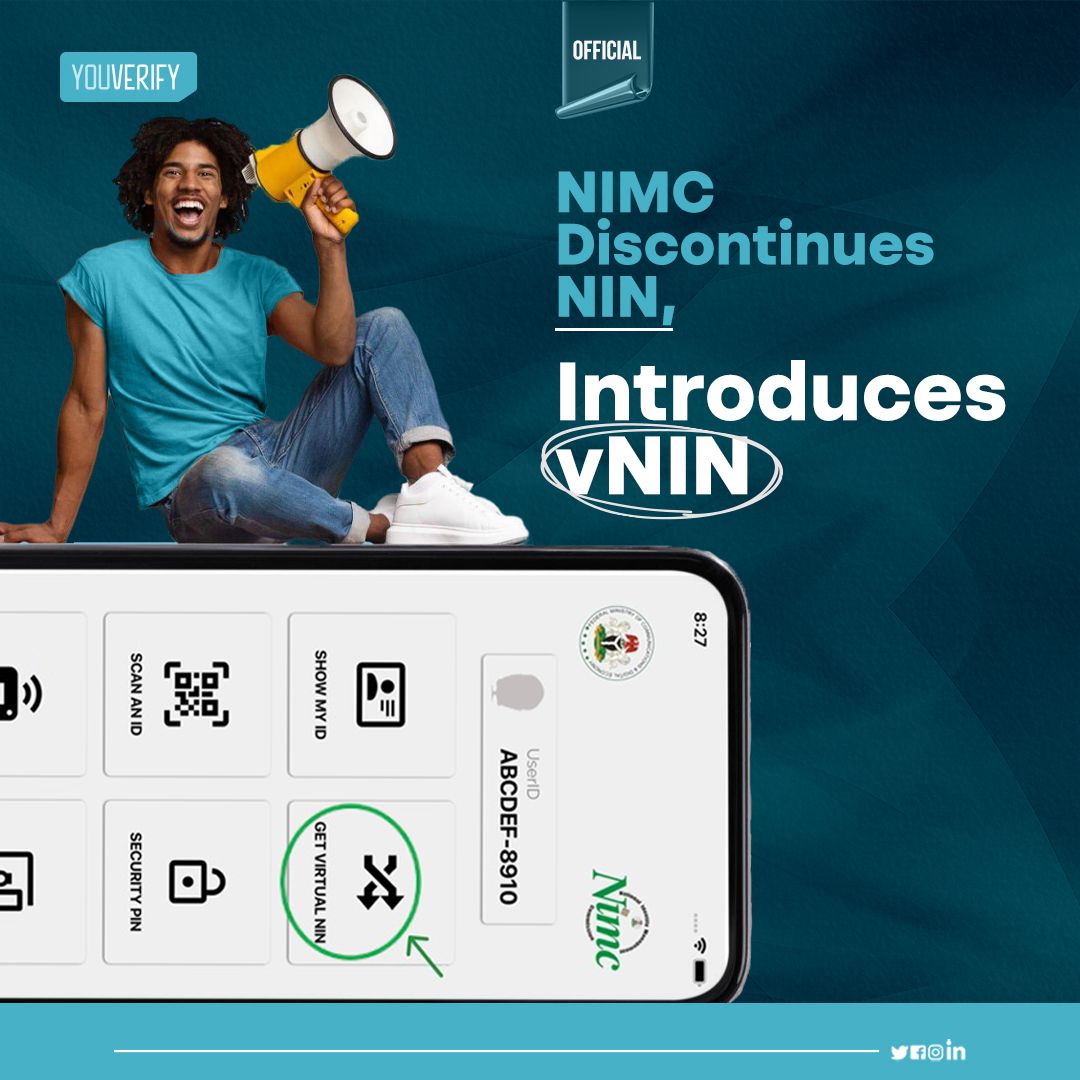 “The service has now been replaced with a tokenised version, called the Virtual NIN Verification (vNIN)”

As a result, the NIN verification feature on our platform has been cancelled and customers have to migrate to the new vNIN service via our latest APIs.

Integrate with vNIN Via APIs

Please contact us at support@youverify.co if you are having any difficulties with migrating or have other questions.

Here’s a quick breakdown of what this latest development means for your business and customers.

What is Virtual NIN (vNIN)?

The Virtual NIN or vNin is a tokenized version of the 11 digital NIN. It contains 16 alphanumeric characters that can be used to verify your customer’s identity as opposed to using the 11 digits numbers initially used.

Essentially, the vNIN can be likened to an OTP code generated by a NIN holder, which can then be forwarded to a business for verification.

With the introduction of vNIN, there is no need for your customer to provide their real NIN to you. Instead, they provide the 16 alpha-numeric characters generated by the NIN owner. The vNIN is valid because it is exclusively issued by the ID owner who has a NIN from NIMC.

In a nutshell, the vNIN operates like the NIN as it can be used to verify a customer before onboarding your business platform, protecting you from fraud.

Integrating the vNIN with your Business

Let’s get down to the step-by-step process of how you can integrate the vNIN with your platform.

If you’re connected via our API portal, we will provide you with new documentation. This will serve as a guide for seamless integration. This documentation is similar to the one you’re already used to except that it’s for the vNIN.

Customers can generate their vNIN via the USSD command (*346*3*Your NIN *Agent code#) or through the MWS NIMC Mobile App which they will also need to provide their agent code in the “generate vNIN” tab. On completion, a vNIN token will be sent via SMS to the customer.

They can check how to get their NIN via USSD here.

Our agent code is “471335” therefore, your customers can generate their vNIN via USSD through the following - 346*3*Your NIN *471335# or provide the code in the NIN mobile app vNIN service.

Your customer will provide you with the 16 digits vNIN generated via USSD or MWS NIMC Mobile App. With this digit, you can proceed to make a call to our API and you will receive the customer verification result.

If you use YV OS, simply follow steps 1 and 2, and then supply the customer vNIN under “verification” and then “identity” service. Nothing changes, as we only updated our platform to verify customer vNIN from previous NIN verification.

Please, feel free to contact us at support@youverify.co to guide your integration process.

What Else do you Need to Know about vNIN?

Having cleared out the basics, here is some additional information about NIN:

For more information on vNIN, read the official guide release from NIMC - https://nimc.gov.ng/nin-tokenization/.

In the meantime, we will feed you real-time updates on any further changes from NIMC as they are announced.

Our support time is always available to answer your questions if any and offer guidance to help you seamlessly integrate with the new vNIN solution.

Feel free to contact us via mail at support@youverify.co or place a call to our support team at

As always, we value your unwavering support as a customer. Thank you.

How do banks verify Identity?

What are The Types of Authentication?